Nothing is more exciting than Fashion Week in New York.  The Fall/Winter shows are going on this week and one of the most exciting events was the Derek Lam Fall 2010 Show.  Estee Lauder entered into the world of fashion with new creative director and Fashion Week backstage veteran Tom Pecheux creating the makeup looks for the Derek Lam show, in which urban cowgirls were the inspiration.

Tom Pecheux describes the thought process behind the makeup look:  "When Derek showed me the
fabrics that inspired his Fall 2010 collection – bold and muted
tones mixed with earthy pigments including terracotta, greens
and browns – I thought the makeup shades should be complimentary. So
we chose a blend of bold blue shadows
on the eyes, shimmering copper lips and flawless, matte skin created with a
light foundation — an on-trend beauty preview of what we will see for Fall
2010."

To get the monochromatic look, Tom used a new Estee Lauder metallic eyeshadow that will launch this fall, along with Estee Lauder Double Wear Stay-in-Place Eye Pencil in Midnight Blue and TurboLash All Effects Motion Mascara in Black (available now).  Estee Lauder Double Wear Foundation was applied to the skin, for a matte finish. The cheeks were left bare.  On lips, Pecheux used Pure Color Crystal Lipstick in Crystal Beige.

Hair was done by Orlando Pita for Moroccanoil and the look was more about texture and movement on the runway.  To get the look hair was sprayed with Moroccanoil hair spray, brushing it out and then repeating the process until the desired texture was achieved. 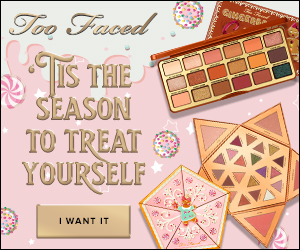